FROM JORDAN WITH LOVE

Who in their right mind would go from running at the lowest place on earth – the Dead Sea – to climbing up a total of 7,600 meters in elevation gain in the Alps of Gastein/SalzburgerLand, Austria for the adidas INFINITE TRAILS World Championships 2020?

According to the “Who Runs the World” team from Amman, Jordan: no one in their right mind would do such a thing.

Her good friend who hales from the U.S, Jessica Morrison, added, “I just love doing things I never thought I would be able to do!”

Dan Ryan, the self-proclaimed ‘way-too-serious one of the bunch’ said that he will leave the jokes for the others and simply said that it sounded like a fun idea to do a trail run in a beautiful alpine setting with good friends. 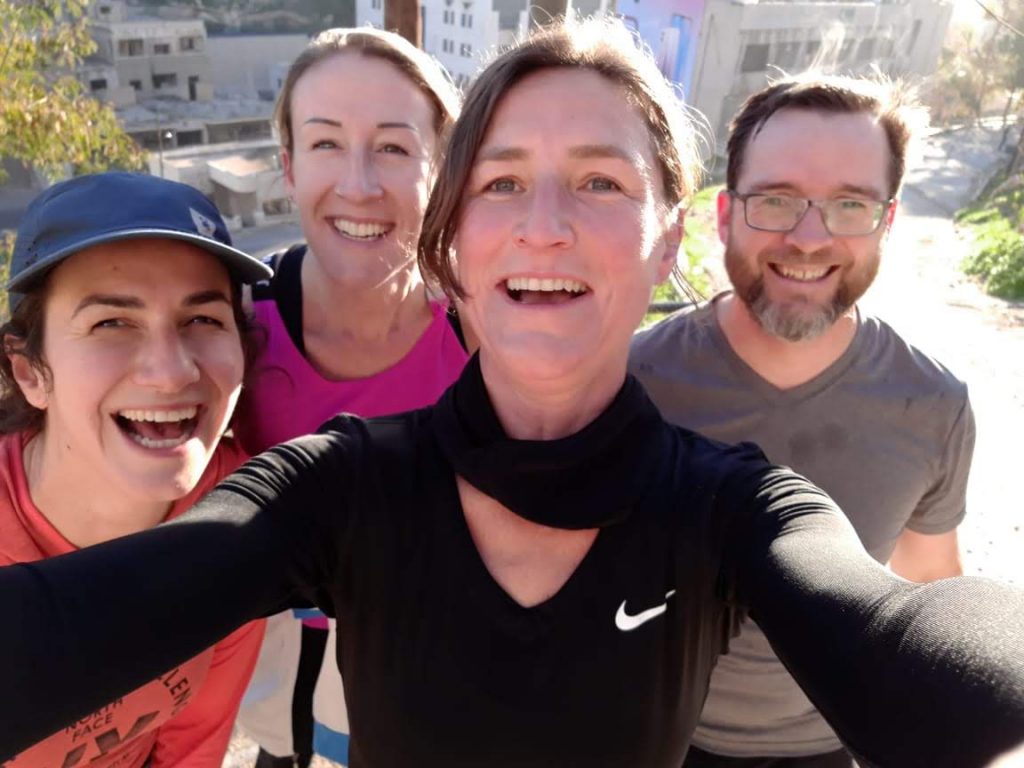 This group of nine runners, originally from seven different countries, have varying cultures, ages, and reasons for living in Jordan but they do have a few things in common: They love running, they are fond of each other and each of them is a little crazy.

At least if you consider signing up for a 127km relay run in the Alps crazy.

They heard about the adidas INFINITE TRAILS World Championships from one of their own, Krisztina Meyers, a native of Hungary,  who has spent many of her holidays in the Gastein/SalzburgerLand region and who participated in the Prologue 15K RUN at the aIT 2019. She described to me her experience, “I ran the prologue race in 2019 and had major FOMO (fear of missing out) watching the main event! I texted my running group back in Amman and well, here we are.”

She added: “It all happens in my favorite place, and combines my love of running, mountains, friends and endless suffering…how could I not go?”

After all, trail running is often about suffering. It brings people together in their mutual joy of pushing themselves to their limits and then beyond. Krisztina and friends have connected through different ways in this once foreign land and are now as tight-knit a group as you will find. “Our running group is diverse not only in where we all come from, but in many other aspects as well. I am fortunate enough to train with people who keep me on my toes, hold me accountable, let me see the world from many different perspectives, make me laugh when I want to cry and are willing to discuss at length the problem of missing toenails! We are truly a running family,” Krisztina said. 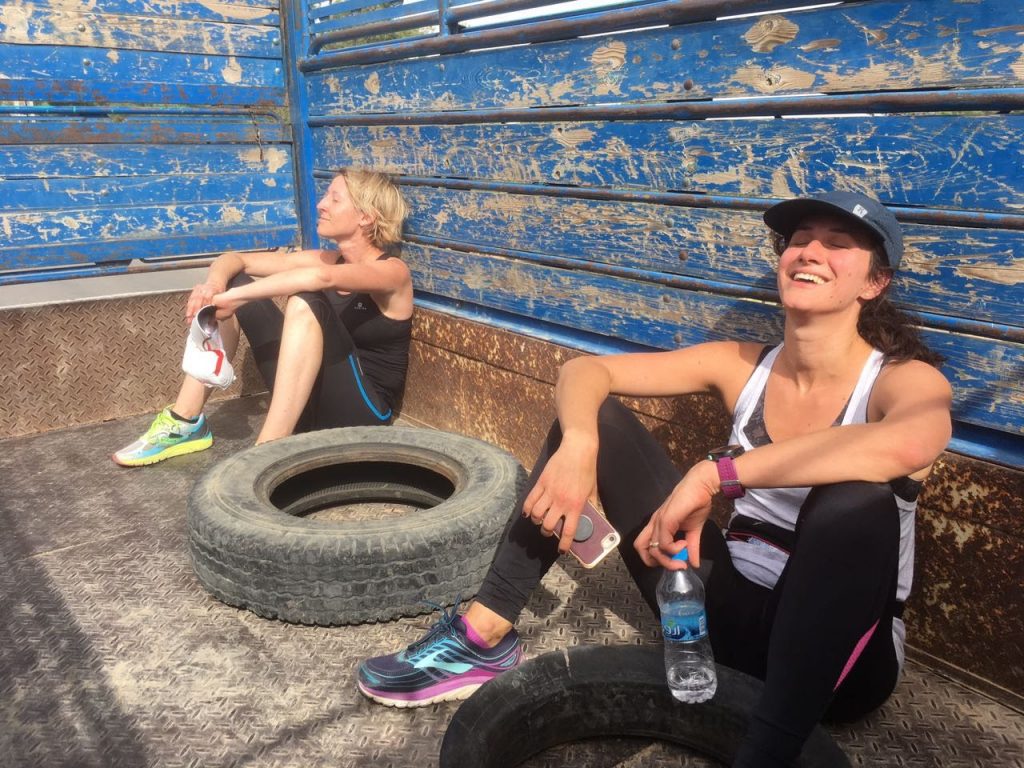 Katy Barnett, originally from the UK, understands that in order to take part in a difficult race like the adidas INFINITE TRAILS World Championships 2020, it’s far better to not have to do it alone. “Two reasons make this a cool race in my eyes: gorgeous mountains, and teams. There is a critical mass level of commitment this race requires which is a whole different order than something you might sign up for on your own, book a flight and take a selfie.”

Silke Handley is also excited about this unique race in a picturesque setting. “I love that I get to live my passion for trail running – at a crazy event – in the beautiful Gastein valley, doing it together with THE team”

The German native added, “the building up to it and training together as a team – dragging and supporting each other through the highs and lows – is truly the best part. Having it as a goal is exciting and keeps me on track to honor a healthy work – life balance and helps me to stay focused and grounded in general.”

Jessica Morrison added, “I am just so excited to finish the last lap as a team!”

Teamwork is the key word for the adidas INFINITE TRAILS World Championships event which is held annually on the last weekend in June in Gastein/SalzburgerLand, Austria. It’s an event that spans over 127km and 7,600 vertical meters of beautiful Alpine paths. Each 3-runner team can help support each other in training and pushing themselves before the race but uniquely, groups like “Who Runs the World” – consisting of nine people – can even possibly meet their good friends on the routes and run them together. 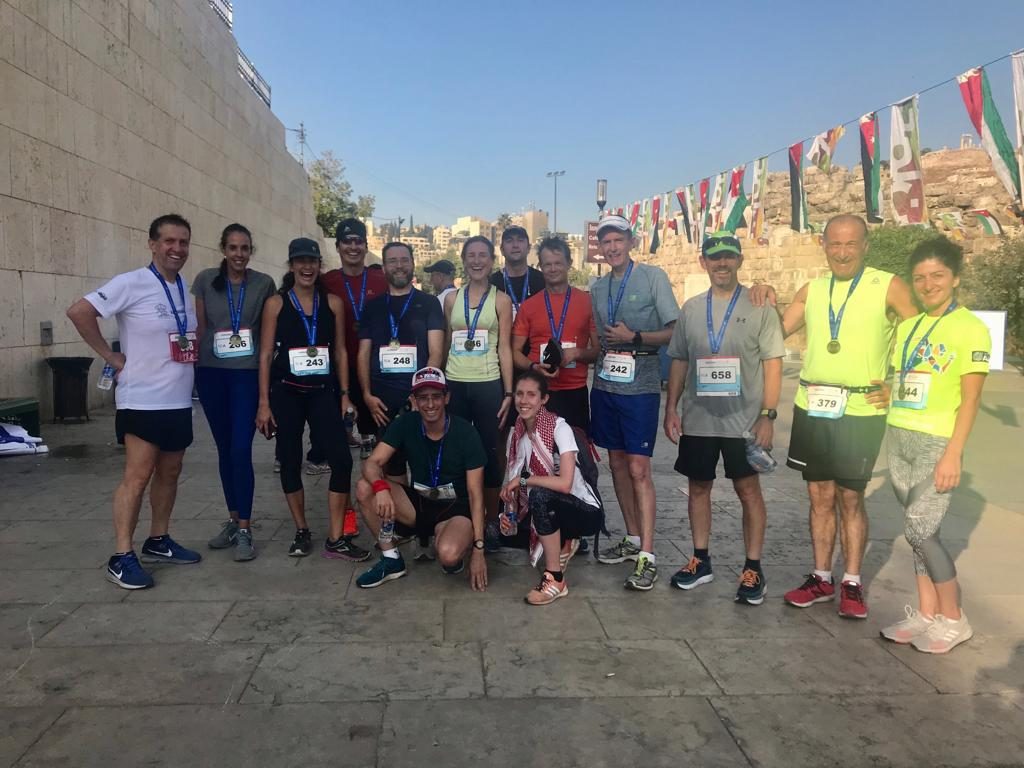 The preparation required for any event of this scale is tremendous, whether training be by yourself or with others. Not only do these athletes have to get their bodies in shape but they also have to eat properly in order to keep their engines well oiled.

“Of course I’ve already started training!”, Katy said. “I’m running regularly, increasing the distance, and combining this with yoga and cold water immersion – that last bit is less scientific, but I reckon it’s got to at least toughen me up. Next stage is to start introducing the elevation gain.”

Katy added, “I’ve also turned vegetarian (like several of my team members) and I am trying to give up sugar. Actually that’s going less well (two mini toblerone wrappers are staring up at me from my desk as we speak). I’m also building up a slow burning, underlying sense of panic. Who wouldn’t? I’m hoping that will stand me in good stead because maybe I’ll be all panicked out and then cool as a cucumber when it comes to the race. In the meantime it will get me out and training, and finally, they do say it helps to visualise, and that’s how my panic often manifests. Finally I have been buying all the very best equipment. I finally admitted to myself that I really don’t like my trail shoes, so I bought some new ones. They are comfortable – there is no need to suffer before you even start running! – waterproof and very stylish. Makes me want to run!”

Dan Ryan has been  increasing his distance, running more hills, using the stair machine, and doing long trail runs on the weekends. Luckily for him, in Amman every run is a hill run as the hills are unavoidable. They are surrounded by beautiful desert mountains rising up from the Jordan Valley and the Dead Sea, which, according to him, provides some excellent trail running opportunities.

It seems hard to believe that someone could train for a mountainous trail running event like the adidas INFINITE TRAILS World Championships in the lowest (runnable) place on earth, but the Amman area offers plenty of challenges alongside being a thoroughly charming place to explore. At least Silke thinks so: “Exploring this beautiful country with its rich heritage through running is a true privilege. How often do you get the chance to run in spectacular ‘wadis’ (valleys) and countryside, embark on an ancient castle tour, run in the red desert alongside camel herds, compete in a race through Petra (UNESCO heritage site) or indulge in a run alongside the sea lines of the Dead or Red Sea? 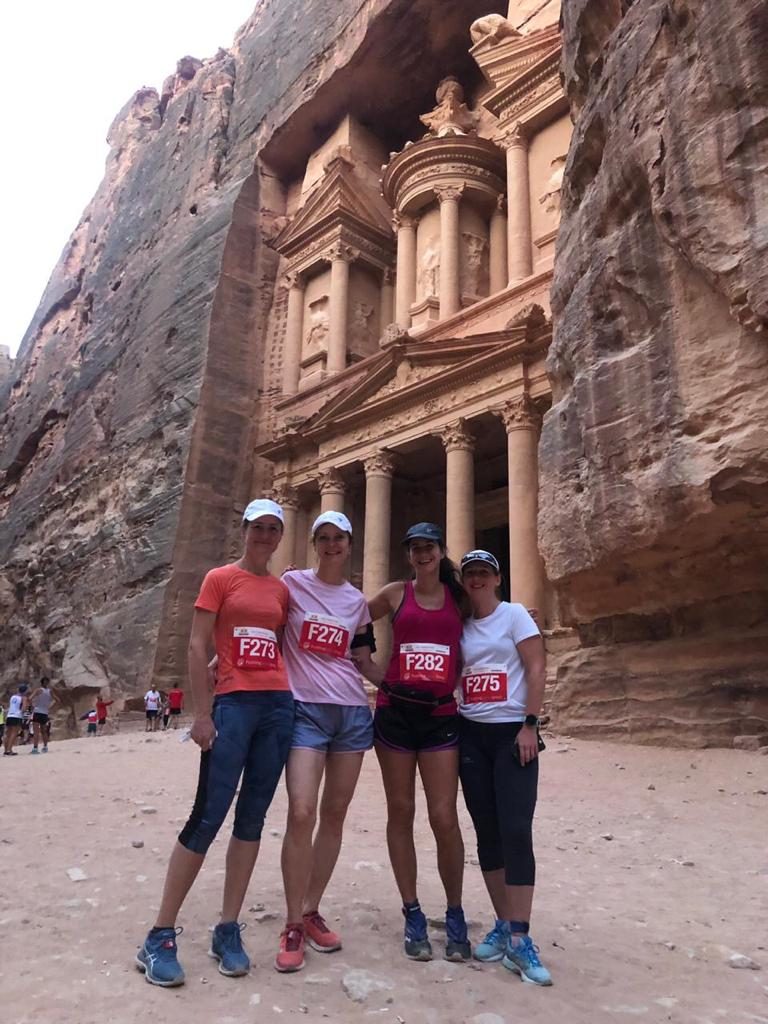 Silke continued, “there is a big and very supportive running community in Jordan and quite several races being organized in-country and in the region. Running in Amman on any morning, you would never be alone. It’s all happening right in front of your doorstep. It’s irresistible!”

Dan also had great things to say about the experience of running in Jordan: “The people are amazing, hospitable, and welcoming.  So many times we’ve met strangers on our long runs who have given us rides, water, fresh pomegranates plucked from a tree, and friendly waves of support.”

Dan (also known as ‘Bossman’) continued,” running in the desert is also amazing –  sweeping views of the Jordan Valley, dry riverbeds, soaring cliffs, undulating hills. And Amman is a good place to run, especially when we end a run downtown and get to enjoy a fresh-squeezed juice from the street vendor. The weather is good year-round except for a few days of heavy rain each winter. And there is a great running culture and some amazing races here – the 242km Dead2Red relay race from the Dead Sea to the Red Sea; the Full Moon Marathon in the pink sand of Wadi Rum; and the Amman Marathon to name a few” 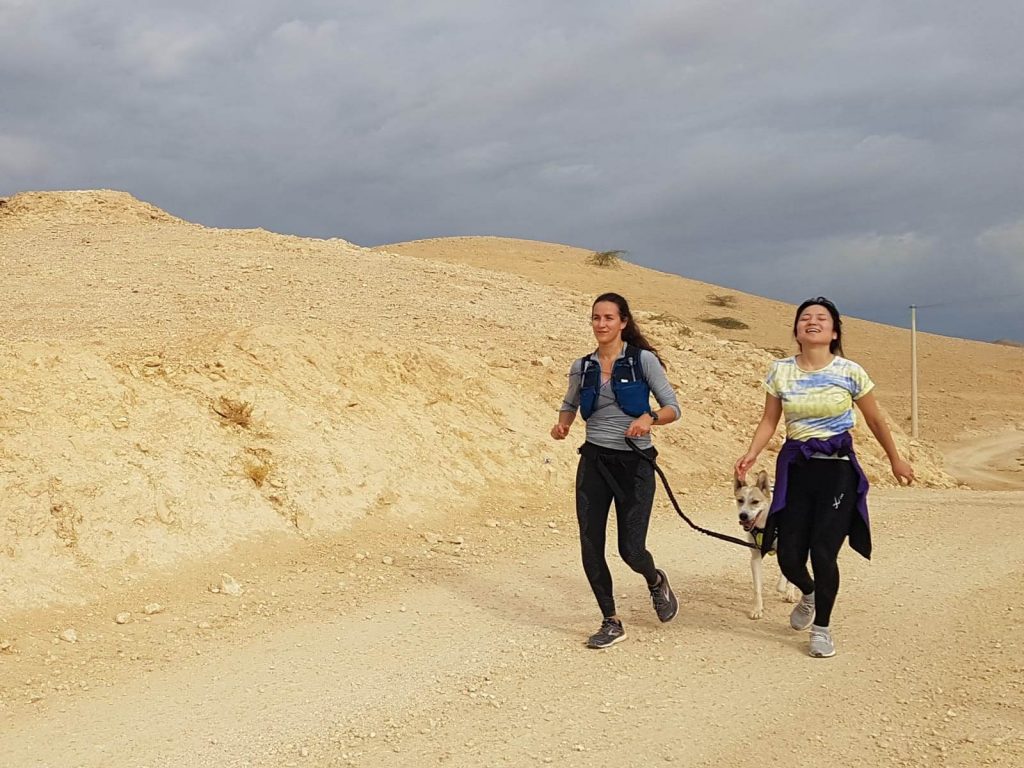 Running, like life, is more enjoyable and manageable when you have the support of friends you can count on. This eclectic squad of friends takes deep comfort in one another and each one of them has helped to change the others’ lives for the better.

Silke explained it like this: “Our common identity is running and that’s how this group was founded some years ago – I count as one of the newer additions. For many of us the group has become more than just a running group but also one of friendship and support for one another against the very busy lives we lead. We come together for brunch, have special celebrations and join up for family adventure outings.

She continued, “we come together several times a week for running and to train for races we choose together. The adidas INFINITE TRAILS World Championships has been high up on the target list of the founders of our group and we are super excited to be participating this year. It’s the very colorful spirit and humour that makes this group rather unique. Just the right dose of kick-ass and peer-support and a cheeky light-hearted competition amongst us all!”

Silke finished with: “Our group’s meeting point is called COU – Center of the Universe – I think this says it all for what this group means to us. We all have our individual careers, family, personal history and struggles and surely lead very busy lives but running is our passion and it’s what glues us together as a group.” 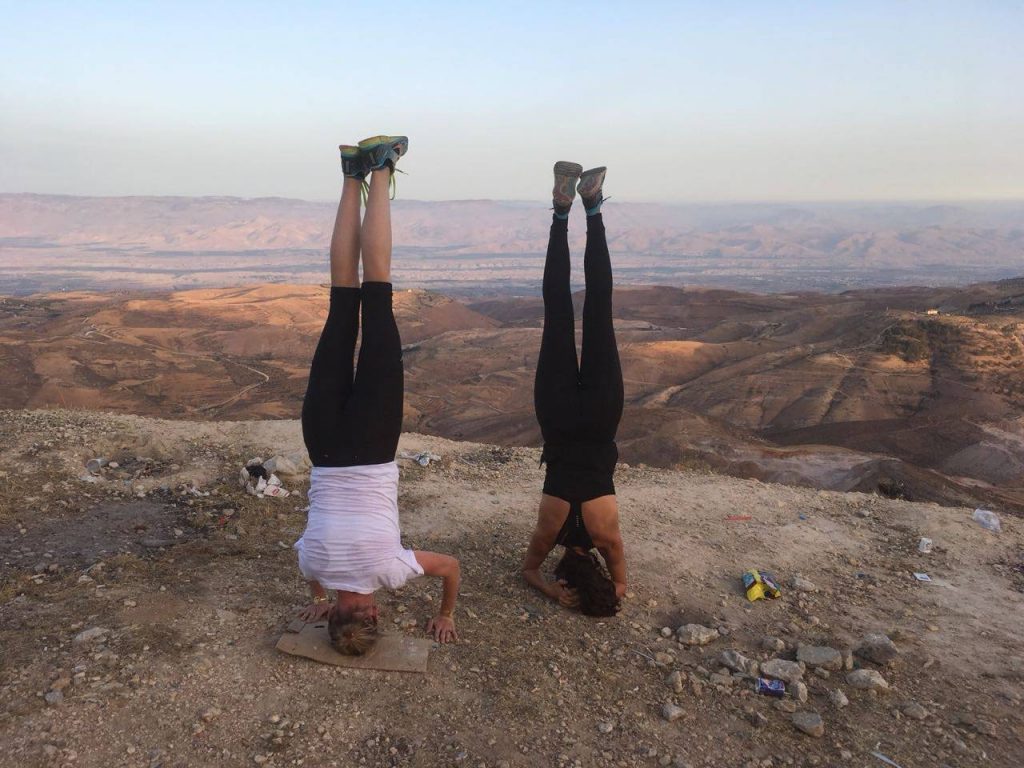 As the snow slowly melts and the skiers begin heading home after a long winter in Gastein/SalzburgerLand, the dates of June 25th until June 28th should be marked in red ink on our calendars. The adidas INFINITE TRAILS World Championships 2020 is just around the corner and team “Who Runs the World” will be glad to meet you there! Registration is open and since there are a limited number of athletes allowed entry, don’t hesitate to find your squad and start stretching your legs!