How long do you think it takes to convert a die-hard urban street runner who is used to maneuvering through concrete jungles of New York City into a trail runner…a year? Six months? The adidas INFINITE TRAILS World Championships 2019 will feature  at least 15 runners from New York City and so, in a few short weeks, we’ll have an answer to that question.

The 15 team members are natives of South America, Africa, Britain, and yes, America but they’ve all come together on the crowded streets of the Big Apple as members of the adidas Runners NYC. As you would imagine, these guys and gals are by and large ultra and marathon runners and not so much into trail running but when they were presented with the opportunity to get outside their comfort zones and run some verticals, they jumped at the chance.

It’s an ambitious project and a great adventure that adidas Runners around the world have embarked upon and these community runners have a proper goal – to start as a relay team at adidas INFINITE TRAILS, which underlines the new community spirit that has found its way into the single-player-sport of running. 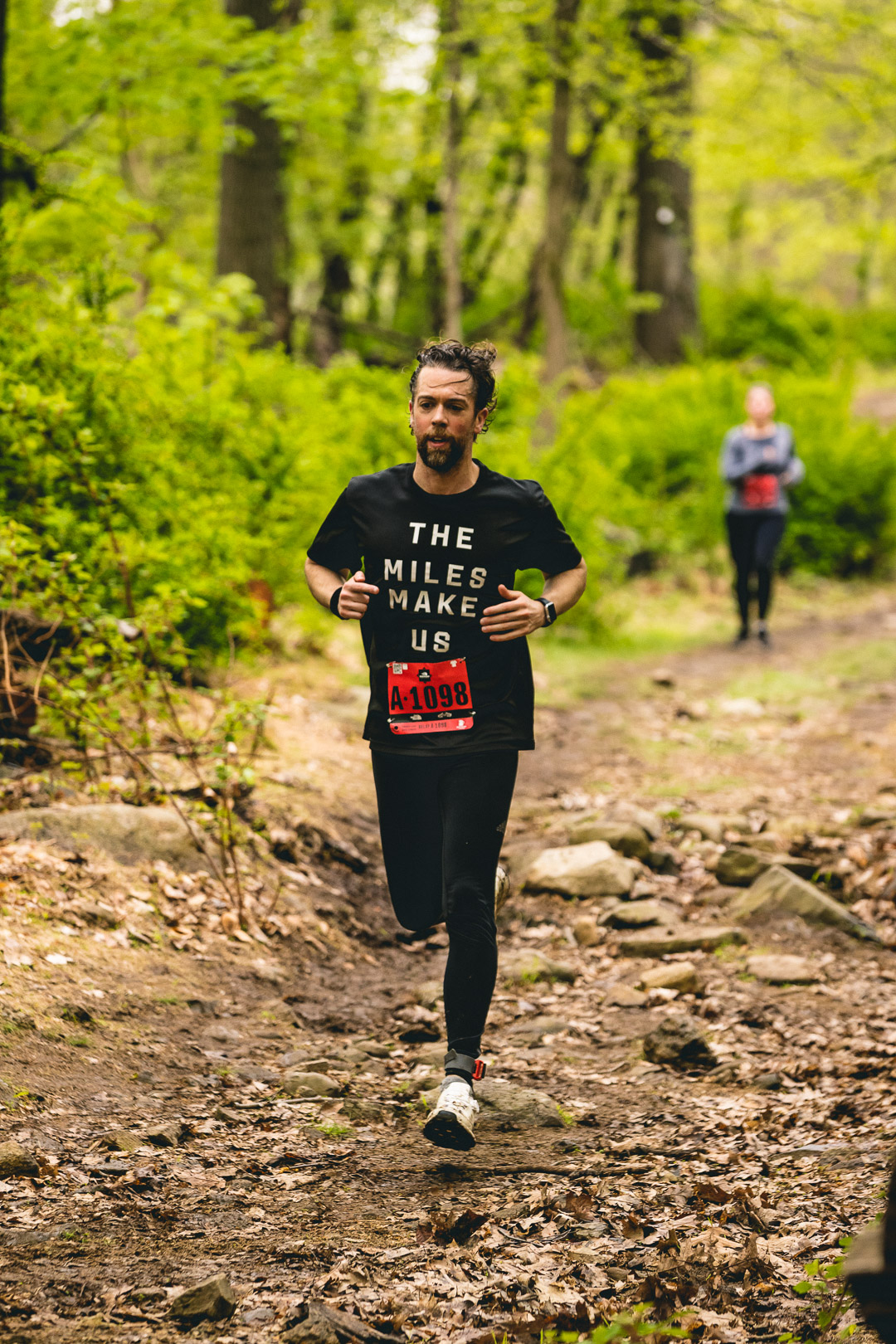 “Ultra race in the Alps with my favorite people? Why hasn’t everybody signed up?”

Will Temple, who is from Brooklyn, is one of the 15 that were “all in” when presented with the opportunity of running  in the adidas INFINITE TRAILS World Championships in Gastein/SalzburgerLand, Austria. The team perspective of the race is perfect for Will who has a long history with running but fell truly in love with the sport after joining the adidas Runners NYC team.

“After I was introduced to adidas Runners NYC, running took on a new meaning. Now it’s more about community, and my crew have become some of my best friends. I’ve been able to take what I’ve learned about running, perseverance and failure and apply it to my life. I can say in no uncertain terms that running has helped give me a life beyond my wildest dreams.” 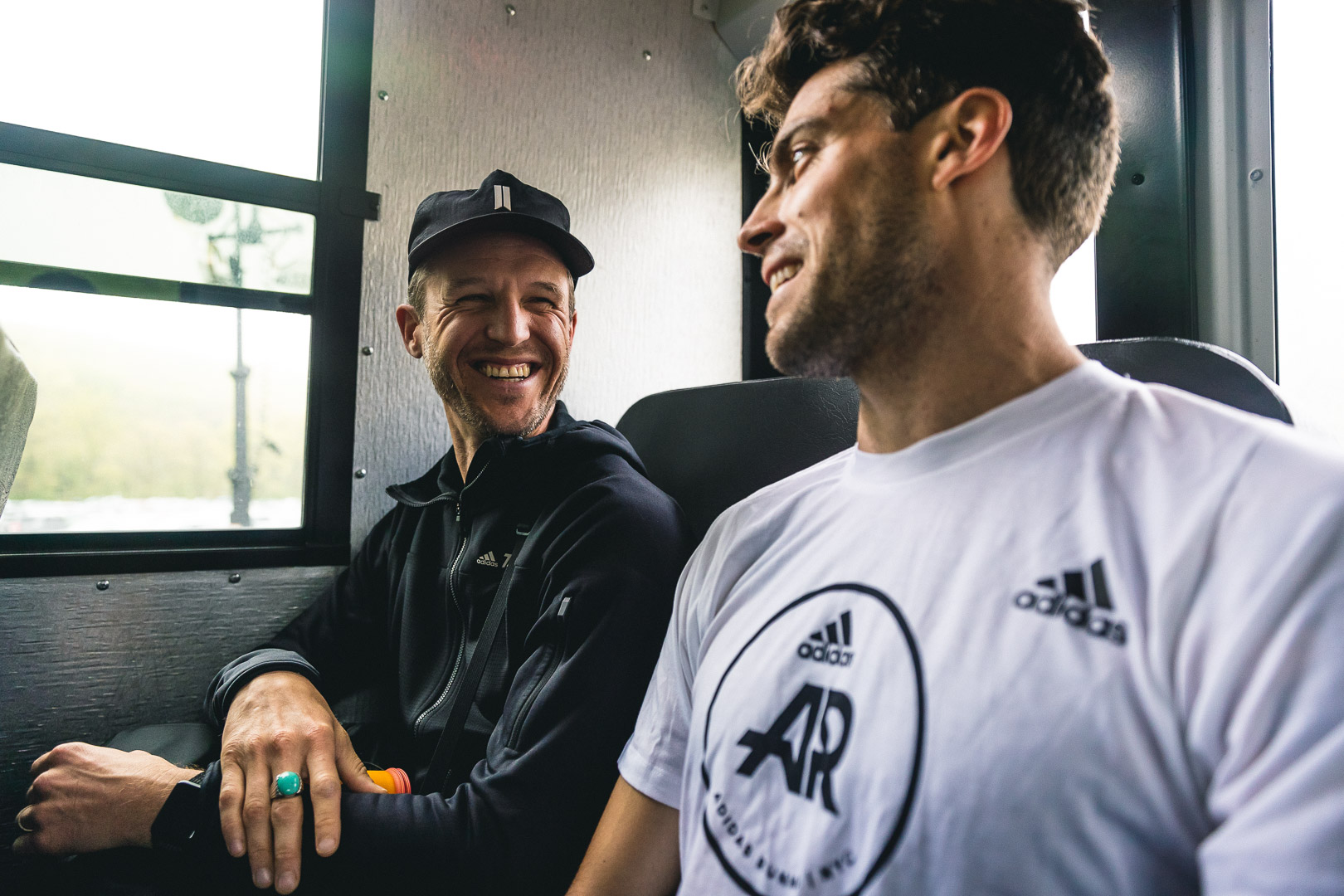 Will claims that the most important challenge to overcome will be the fear of tripping but there are other challenges that go along with the switch from racing in the streets to competing in the mountains.

Fabian Caicedo a native of Ecuador thinks that the team could face some other challenges:

“Running in unpredictable terrain, probably under changing weather conditions are my challenges, but I believe we (adidas NYC Trail Team) are prepared for the expected and we will face the unexpected in the best way possible, I’m confident that our training will have us prepared.”

Argentina native, Antonio Hernandez, explains in even greater detail the challenges they will face:

“There are so many more variables to track in real-time during a trail run. Wearing the right gear and equipment, hydration, nutrition, weather, visibility – all while calculating where and how you should take the next step. As the body begins to wear down, your legs become a little slower and maybe less responsive but your mind is still as sharp as ever. Learning mindfulness and how to listen to your body to make the necessary adjustments is one of the biggest challenges. The training program to prepare for the race was no walk in the park either!”

The challenges are part of the fun according to these enthusiastic athletes. They signed up for this experience because they wanted to push themselves and experience new sides to their sport.

Jessie Zapo, adidas Runners NYC Performance Coach, is the heart and soul of the group and her path to the adidas INFINITE TRAILS World Championships began when she was just a kid:

“I ran track and field as a sprinter in junior high and High School. I got into distance running later in my early 20’s for fitness and stress relief. I began marathoning as a young adult when I joined the New York City Bridgerunners in 2005. In 2012 I founded a membership based running group – the Black Roses – with a focus on training adult runners (both new and experienced) for goal races from one mile to ultra-marathons. I enjoy traveling, cycling, painting and photography when I’m not running. Fast forward to today, I am currently an artist, wellness professional and running coach based in New York City. I am the founder and coach of Girls Run NYC, a Women’s running collective, and also the Performance Running Coach for adidas Runners NYC.”

“I ran my first 50k in 2012 and then time went by and I was coaching more road running. Last year a friend encouraged me to get back onto the trails and I ran a 50k outside of Seattle. It got me inspired again to run trails–because I think I am a better runner and person out in nature. When we had the opportunity to put together a trail team, I jumped on it because I know that being in nature and running on trails will inspire a lot of people like me who live in the city. It’s been an amazing journey since we started the team in January. We’ve gotten so close with each other and it’s through the power of the outdoors!”

As Jessie mentioned, this team was founded in January, 2019. In other words, though many of them have been running together for some time, they’ve been training for the adidas INFINITE TRAILS World Championships 2019 – and mountain running in general – for only six months. It’s a whole new ballgame but don’t count them out in competing for the equal pay prize money on Sunday, June 30th. They are a tough-willed bunch and their togetherness will undoubtedly give them a boost as they face the various challenges which await them on the Alpen paths. 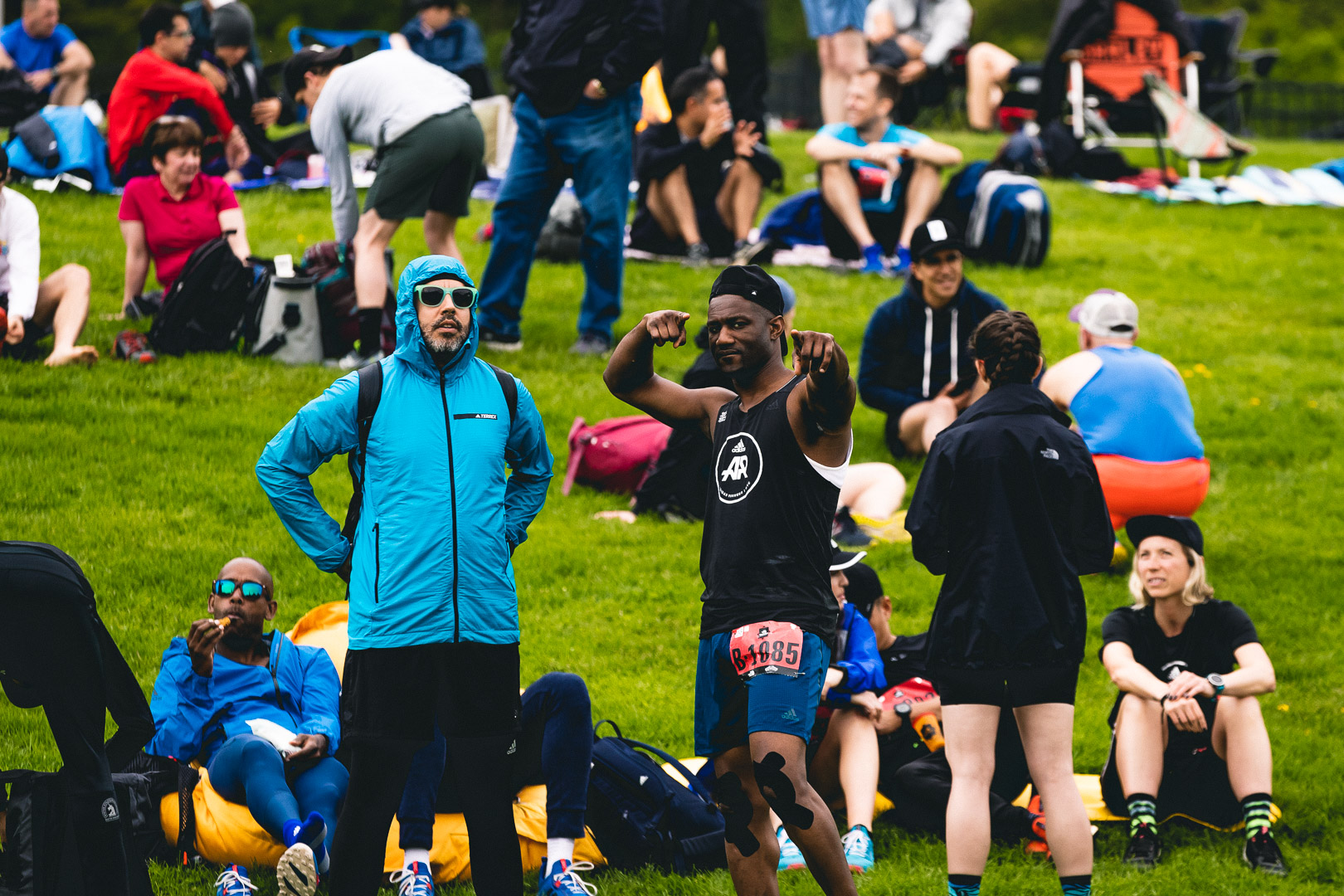 Here’s what some of the other members the adidas Runners NYC think of their opportunity to hit the trails in Gastein/SalzburgerLand, Austria:

“It’s all worth it since it is truly engaging to be surrounded by beautiful views that encourage you to keep going. To me, trail runs don’t feel as long because it’s much more enjoyable than always running on roads. I’ve also found that my recovery time is a lot shorter after trail runs because there isn’t as high of an impact on my joints.”

“I am so appreciative that I have the opportunity to participate this year. I signed up because of the support I received from my Adidas community. This is a new challenge for me especially since I really don’t compete in races.”

“Trail running is much different than running on the road, I had to train my feet and body to move in a way that it wasn’t used to but it was helpful to be surrounded my team members who could provide me with tips, insights and techniques.”

“Trail running is obviously a challenging sport. You could run for hours alone in the middle of nowhere. It could get tough as you could start questioning yourself why are you doing this. That’s when you need to remind yourself why you trained so hard and then push your limits while you also look up around you and enjoy the amazing trail landscape.”

“I think we will do well. I know everyone I run with has been working extremely hard and sticking to our training plan. I also feel prepared going into the race because we got so much advice from other more experienced trail runners, such as Timothy Olsen and Marcel Hoche, when we went trail running as a team in Colorado.” 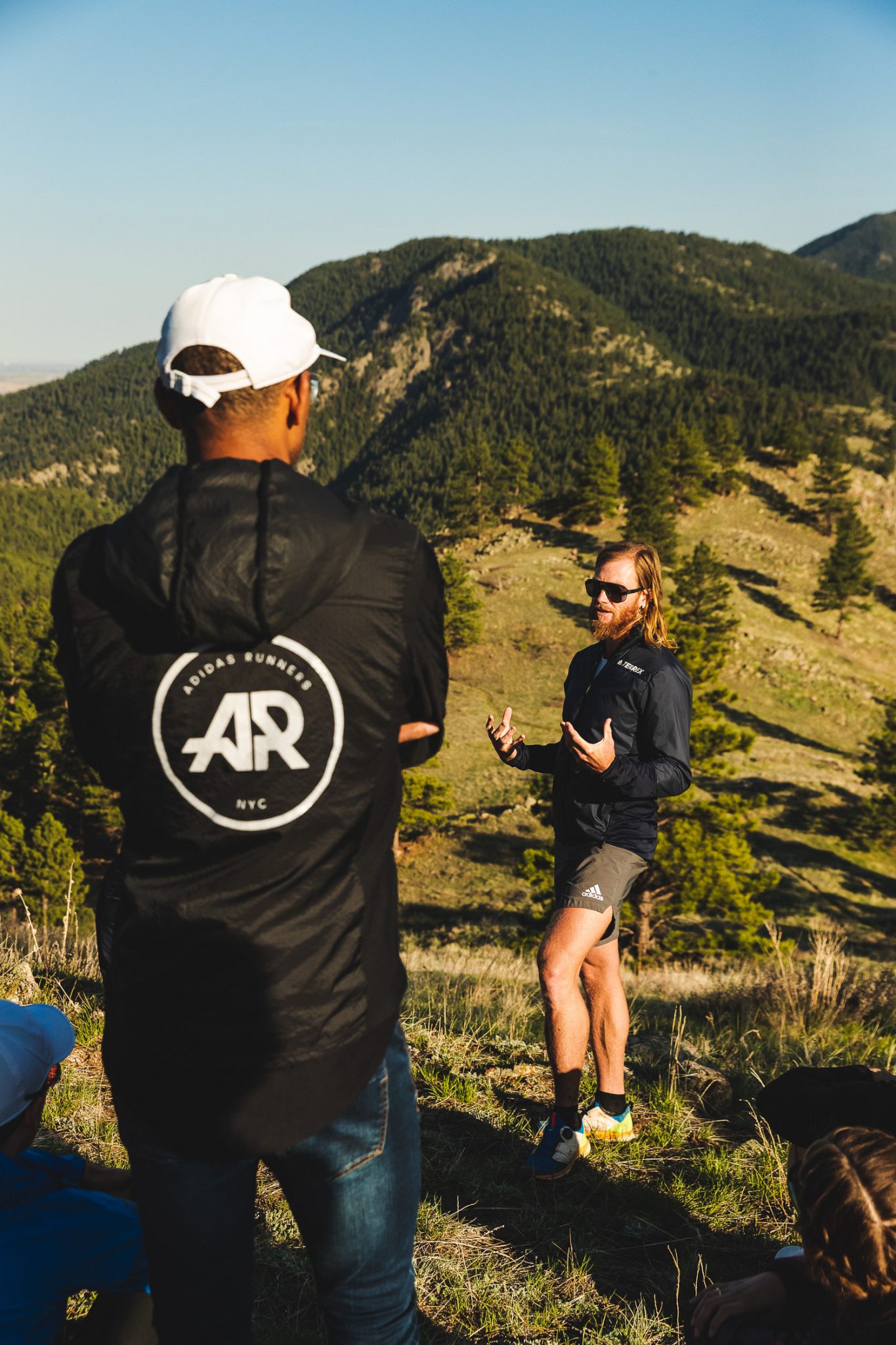